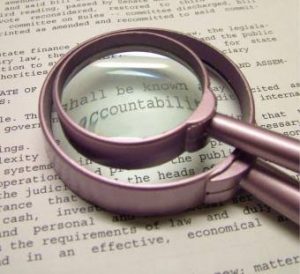 Four key principles and/or concepts – accountability, transparency, participation and inclusion – have over the years become nearly universal guiding features of democracy, policy making and good governance. More particularly, transparency and accountability constitute the panacea for sustainable democracy in forward looking nations of the world. When people talk about governance, they lay considerable emphasis on transparency and accountability, and clearly, there is no gainsaying that these are not attainable unless citizens participate in governance processes and demand for them.

This article focuses on how ordinary citizens can contribute to the struggle for good governance characterized by transparency and accountability, but it is important to understand these principles. The United Nations Development Programme has outlined eight criteria for identifying good governance in this paper. Two of the eight particularly point to these issues of discourse. Good governance fundamentally implies accountability. A state must be accountable to those affected by the decisions made and policies implemented. The next, and as a corollary of the first, accountability presumes transparency. This simply means that the state must always strive to make the decision-making process as open as possible so that those affected will get the understanding of what government is doing and why. Transparency requires that government must always justify its decisions and actions to citizens. Transparency International also defines transparency as shedding light on rules, plans, processes and actions. It is knowing who, why, what, how, and how much. Transparency ensures public officials, civil servants, managers, board members and businessmen act visibly and understandably and report on their activities, this therefore implies that the general public can hold them accountable.

It would be unfair to push the narrative that Nigerians have not been doing anything to question unguarded, dangerous actions and policies by the government or public office holders. Matter-of-factly, Nigeria has a long history of activism. Beginning in the 1990s, organisations such as the Civil Liberties Organization and United Action for Democracy led the movement against military rule, mobilizing citizens to take a stand and organizing demonstrations in the streets. Efforts by Media Rights Agenda and others were critical to expanding civic space and protecting freedom of expression. Labour unions and civil society organizations, even in recent times, have also been at the forefront of major changes, including various economic and social policies. However, there still is a great need for citizens to push for accountability and transparency especially in a country characterized by high levels of corruption.

Like many activists believe and I do too, every change requires a demand for it. More actionable steps need to be taken to arrive at the Nigeria we all want and deserve. From increased education, grassroots engagement, checks and balances, to involvement with and support for existing CSOs and NGOs among other steps, our struggle for accountability and transparency in governance can incrementally take a swift turn towards an end.

Accountability and transparency in governance is an attainable goal. A few countries have made significant progress with that, and Nigeria can too. It is through the individual and collective efforts of ordinary citizens, and institutions that we can build the governance we want. So, let’s get to work!

This article was written by Hillary Nwoziri