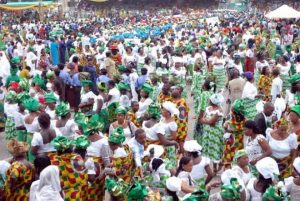 Over the years, I’ve seen a prevalent low rate of women’s involvement in politics in Nigeria and this has left me wondering if politics is a “men’s affair”. According to this paper, the national average of women’s political participation in Nigeria, has remained 6.7 percent in elective and appointive positions which is far below the global average of 22.5 percent, Africa’s regional average of 23.4 percent and western African sub regional average of 15 percent. For so long, women have been perceived as second–class citizens not just by men, but by women themselves as well. A lot of women do not even believe they have the capacity to lead politically.

Politics in Nigeria since independence has been dominated by men and only few women have been able to break through the barrier. Barriers to women’s participation in politics in Nigeria are culturally and economically imposed. In Nigeria, a woman is often seen as a man’s property and must therefore only do what her man approves, and her man may not approve of her involvement in politics. An average Nigerian woman’s role starts and ends in the kitchen and “the other room”. Economically, most women often are unable to cope with the financial requirements of political involvement.

The proportion of the female population of Nigeria stands at 49.34% yet the population of women in political leadership does not reflect this. Women’s leadership prospects have not been adequately maximized politically. Women being involved is better off for the society. Their non-involvement in sectors whether political or economically haven’t been without a consequence. According to the director of UNDP’s Regional Bureau for Africa “since 2010, African economies have lost $95 billion yearly because of gender gap in the labour markets”, meanwhile, UN women had projected that investing in women’s economic empowerment sets a direct path towards gender equality, poverty eradication and inclusive economic growth.

So, what do I recommend?

3. There is urgent need for education in all parts if the country, but more so in underprivileged parts across the                country where little have been done. Enabling environment for education, as well as an increase in the demand            for education through organized sensitization on the importance of education are a prerequisite.

4. There is also an urgent need for mentorship. Women who have succeeded should put more effort in helping                   other young women become better through mentorship. To find a mentor, here are some tips:

A few coalitions and groups like the Young Women in Politics Forum under the umbrella of the Nigerian Women Trust Fund, exist to serve as a network of young women interested in or already involved in politics, and to support women to run for office and engage their constituencies. Being a member in such forums as this is a huge way to getting access to and finding a mentor(s).

Women like men, have every right to vie for political positions or get involved in political activities, and the benefits of women’s participation can only be experienced if the untapped capacity and talents of women are maximized. Then we can have a more democratic, equal and inclusive society.

This article was written by Ogechi Ekejiuba