For any nation in the world to be fully developed, its citizens have to be active participants in the governance process. This means that for a community or nation to develop, its citizens must contribute meaningfully no matter their status in the society or country.

Goodluck Jonathan, former president of Nigeria once said, “any society or country that closes the vital valves of its democratic space can neither develop at a reasonable pace nor have good governance” and when we talk about democracy, citizen participation cannot be dismissed because it is a prerequisite for good governance.  Every society is intrinsically designed as an institutional system made up of economic, cultural, religious, political and other professional structures. And to achieve all societal good as well as goals of these structures; governance is key, but not just governance, good governance. Which leads us to asking: what is Governance?

Governance is the act of leading, controlling, directing, and exercising authority to enacting policies and decisions that serve the overall good of a people in an organized society. It is a process whereby rules and laws are framed by the government and are implemented through representatives of the state.  Government and governance are often exchanged in interpretation as many of the elements and principles that underlie a ‘good government’ have become an integral part of governance. Governance and government are interconnected and this is because governance is the way power is exercised by governments for the distribution and administration of resources However, it is important to separate the two for the sake of clarity. Government is a group of people who rule and run the administration of country; it is a body of representatives that govern and control the state at a given time. 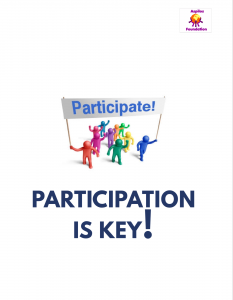 Undoubtedly, in Africa, Nigeria to be precise, successive governments have shown a lack of commitment to citizen engagement but rather consistently undermine opportunities for citizen participation. The United Nations Conference on Sustainable Development adopted that for effective governance at local, national, regional and international levels, there is a need to enhance citizens participation and effective engagement to represent the voices and interest of all. There is no gainsaying that the Nigerian government has failed in this, but the blame is not totally hers.

It means that among other things:

If you’re not doing at least 3 of these things, then you’re doing yourself and the rest of us a big disservice. The role of your participation in impacting and influencing governance processes cannot be overemphasized. From voting governments, to contribution in policy making and its implementation process, the list goes on. Your participation positively shapes the future of our nation politically, socially and economically.

This article was written by Lukman Abdulmalik