We hope you’ve learnt something from our previous policy breakdowns. The news is rife with updates of someone killing or maiming their spouse, a scorned lover pouring acid on an ex-lover, a person being forcefully taken away from their family and more. So this week, we’re exploring what is popularly known as the VAPP Act which was passed into law in May, 2015. Today’ we’ll take you through a quick summary of the act covering its introduction, general provision and limitations. Next week, we’ll delve into its specific provisions

The Violence Against persons (prohibition) Act (VAPP) was a result of agitations for the protection of people against all forms of violence especially with the rise in domestic violence and general violence in the larger society. It was in a bid to eliminate violence in private and public life, prohibit all forms of violence, including physical, sexual, psychological, domestic, harmful traditional practices, prohibit discrimination against persons and to provide maximum protection and effective remedies for victims and punishment of offenders. 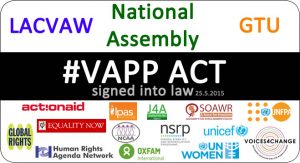 The VAPP Act is an improvement on the penal and criminal code in relation to violence; it also makes provision for compensation to victims as well as the protection of their rights. The Act covers most of the prevalent forms of violence in Nigeria today ranging from physical, psychological, sexual, and socio-economic violence as well as harmful traditional practices, with the National Agency for the Prohibition of Trafficking in Persons (NAPTIP) as the service provider.

The major drawback in relation to this law is its limited application to the Federal Capital Territory, Abuja as only the High Court of the Federal Capital Territory Abuja empowered by an Act of Parliament has the jurisdiction to hear and grant any application brought under the Act. There is also a need for the state assemblies to implement this Act as soon as possible, as only three states have so far implemented it (Kaduna, FCT and Benue State) and this limits the effectiveness of the Act.

Duplicity of laws, which is not an unusual phenomenon in Nigeria, is another major downside of the Act given that most of the crimes stipulated in the VAPP are provided for in the existing criminal laws and in sections 35, 40, and 41 of the constitution. It is believed that this Act will bring succour and effective remedies to millions of victims who have suffered violence, in one form or the other, in silence without recourse to justice or rehabilitative, psychological or social support for their recovery and reintegration. The Act does not only ensure that the violators are brought to justice, but also that the victims are adequately compensated, re- integrated into the society and given the necessary support and protection. It is thus expected that the other states in Nigeria will take immediate and necessary action to adopt and enact similar law on Violence against persons.

The Act has made a difference in the lives of Nigerians and here are 2 cases that show that:

We’re going to take a pause here, we’ll continue next week with a breakdown of the provisions contained in the Act.