In this episode and the next, we’ll be breaking down the Discrimination Against Persons with Disabilities (Prohibition) Act, 2018. A lot of us discriminate daily against Persons with Disabilities (PWDs) knowingly or unknowingly. They are excluded from things that those without disability do not even give a second thought to. You just have to take a walk down any Nigerian street to see evidence of how PWDs are not considered at all. We are glad that some deliberate thought is being put towards increasing inclusion and justice for PWDs. Let us all be reminded that PWDs  ARE PEOPLE. FULL STOP. 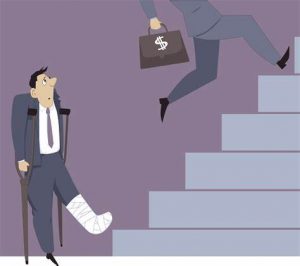 What has the journey of the DAPD Bill been like?
This bill has been 19 years in coming! It was first sponsored as the Disability Bill in 2000 In 2007 Nigeria ratified the United Nations Convention on the Rights of People with Disabilities (CRPD) and in 2010, its Optional Protocol. This opened up the way for the Discrimination Against Persons with Disabilities (Prohibition) Bill 2009,  which actually was passed by the National Assembly in 2011.

The Centre for Citizens with Disabilities with support from Open Society Initiative for West Africa (OSIWA), Joint National Association of Persons with Disability alongside other actors continued their campaign for the passage of the National Disability Bill. The efforts were unsuccessful as the then president denied the assent to the disability bill in 2015. The denial of assent by the then President Goodluck Jonathan without reason after successfully lobbying the National Assembly in 2015, was a huge setback.

The advocacy continued in 2015 after the inauguration of the new administration led by President Mohammadu Buhari. It was intensified with lobbying and advocacy meetings with the Chairman of Senate Committee on Youth and Social Development, Senator Obinna Ogba on December 6, 2015 who gave assurance of the committee’s effort ensure the bill is passed into an act. The advocacy went on with another meeting with the Senate President and Chairman of the National Assembly, Senator Bukola Saraki on March 6, 2016. The Senate President also gave assurance of the commitment of the 8th session of the National Assembly to support the speedy passage of the bill.

The state of the bill could not be traced between December 6, 2016 and December 5, 2017 as efforts by the CCD to ascertain the whereabouts of the bill were unsuccessful when they observed that the bill was yet to be adopted by NASS, as they were of the opinion that NASS was going to push for the completion of action on the bill. A fact finding visit to the National Assembly by the Executive Director of the Centre for Citizens with Disabilities revealed that the document was missing, which resulted in a media briefing and protest march to the leadership of All Progressive Congress for intervention and convening of a stakeholders forum.

The stakeholders forum on the bill held in Abuja with line Ministries, Departments and Agencies of the Federal Government of Nigeria in attendance. The objective was to strengthen collaboration with line MDAs, CSOs, Media and line NASS Committees and the outcome of the forum was a commitment by stakeholders to partner for the successful passage of the bill.

A policy brief http://bit.ly/2RkAZim was developed to assist in and support successful lobbying and advocacy for the passage of the National Disability Bill while engaging with key stakeholders and awaiting the return of the National Assembly from recess. This document was shared with the Ministries, Department and Agencies (MDAs), Media, Civil Society Organizations, organizations of persons with disabilities and the Federal Ministry of Justice and Attorney General of the Federation (AGF), Mallam Abubakar Malami during a visit to support the campaign for the assent of the President on the bill.

The AGF promised a collaboration between the Federal Ministry of Justice, the Centre for Citizens with Disabilities (CCD), the organisation spearheading the campaign for its endorsement and the Senior Special Assistant (SSA) to the President on Disability Matters to ensure justice is done to the Disability Bill, a legal framework to protect the rights and welfare of persons Living with Disabilities (PWDs).

On January 23, 2019 this bill was finally signed into law by President Buhari thus bringing the 19 year long journey to the much expected end and bringing hope to the 15% of our population who are persons living with disability.

What do people have to say about the bill?

Miss Faith Yaasa, a disability rights activist, is concerned about implementation and just has some more questions : “Are all the foreign aid monies collected being used to really support the people they claim they represent and collect for? What happened to awareness campaigns to sensitize the general public on matters affecting PWDs? What about the economic empowerment of PWDs through realistic and achievable programs that impact the society positively?” This is the right time to take a stand and put a stop to the incessant injustice and crimes committed against physically challenged citizens.

PWDs in Ekiti have called for the effective implementation of the bill. Mr Funso Olajide, the General Secretary of the Joint Association of Persons With Disabilities in the state explained that the law, if well implemented, would give persons with disabilities a sense of belonging and enhanced their standards of living. “Our joy knew no bounds on the victory of President Muhammadu Buhari in the election considering the recent Discrimination Against Persons with Disability (Prohibition) Act, 2018 signed into law earlier this year. “That singular act prompted the disability community in Nigeria to come out en-masse to exercise our franchise for him. “The victories of the National Assembly members-elect in Ekiti, who have been long-time friends of persons with disabilities, gladden our heart. It is our belief, therefore, that they will do more for us than ever before” he said.

Omolara Akintoye Asuni (Human Rights Lawyer) says that, “Persons with disabilities have been discriminated, marginalized and treated majorly as a charity case in the country for so long. Their contributions and possible contributions have not been accorded the recognition it deserves. It is therefore a great achievement that the Act not only seeks to promote and protect their rights but also appreciates the fact that persons with disabilities are not second class citizens in their own country”. She said the Act places a responsibility on the Ministry of Information to conduct awareness programs that promote the rights and dignity of PWDs which will hopefully lead to a transformed society that is accepting of all persons despite their physical appearances.

She however noted that the Act does not provide for social grants to persons with severe disability or their caregivers. At most, caregivers have to care for persons with severe disability full time thereby hindering them from taking up any job. It is important that social grants are made available for their upkeep. Omolara also pointed out that even though the convention on Rights of Persons with Disabilities promotes the rights of persons with disabilities to sports and recreation, the Act is completely silent on this.

“Accessibility level is zero, was banking with access bank and the bank manager made it known to me that I can’t enter the bank because of the metal I’m using and he made it known to all security that anytime I come around they should give me preference and a one on one relationship. How many banks can we go to and still get that level of audience and accessibility? Public institutions should sensitize their workers because we are not beggars, we are part of the society and disability can come to anyone at any time”, Koshofe LGA, Lagos.

Musa, a staff at the Centre for Citizens with Disabilities emphasised the fact that the sole aim of advocating for the rights of persons with disabilities is to promote dignity in life, labour and living and CCD as the lead organization in the advocacy process will ensure the adherence, development and promotion of strategies for implementing the Act in line with Section 31 by continuously and effectively engaging with stakeholders (legislators, law enforcement officers, Civil Society Organizations, Media, society and as many who buy into the goal).

We’ll pause here for this episode, in the next one, we’ll get into the meat of the bill and talk about what exactly this bill holds for us.