What exactly is the use of “Not Too Young to Run”? Is it what we need in Nigeria right now? We at Aspilos Foundation are committed to having good governance in Nigeria and to seeing young people become active players in governance. This is why we support the Not Too Young To Run campaign. Notwithstanding there is a lot more to be done outside this bill and we try to encapsulate that in this piece. 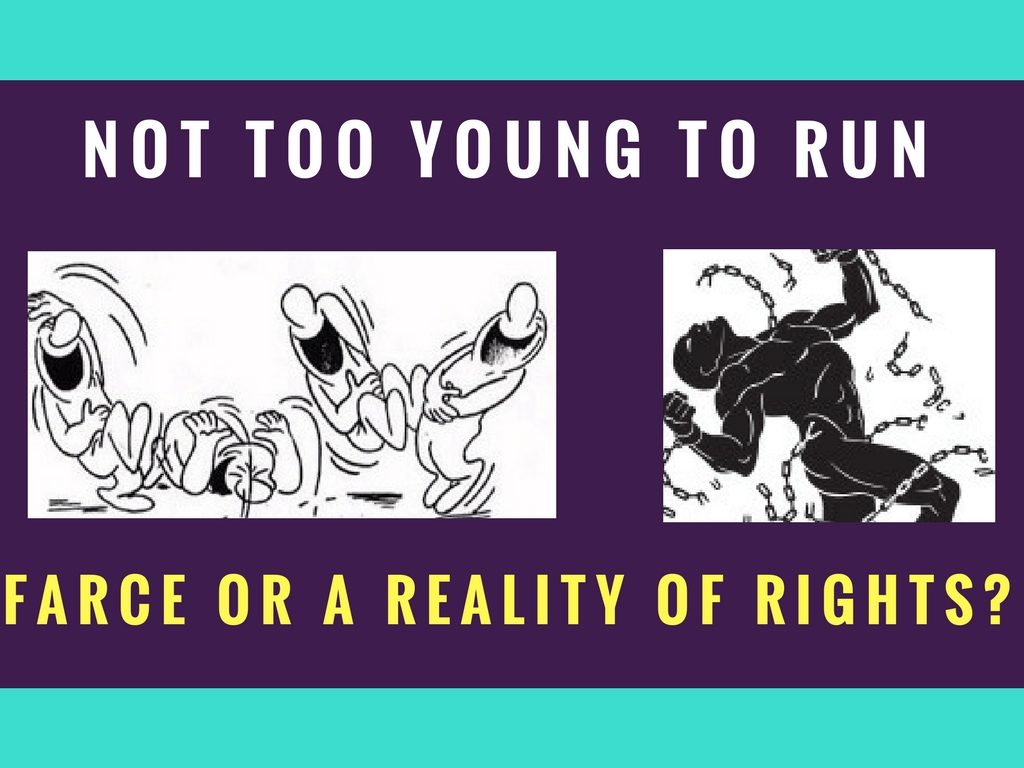 Not Too Young To Run  is a campaign/bill which seeks to reduce the age limit for running for elected offices and to mainstream independent candidacy into Nigeria’s electoral process in Nigeria and globally.  The bill was first introduced and sponsored by Abdul Aziz Nyako representing Adamawa Central Senatorial District and Tony Nwulu, representative of Oshodi/Isolo Federal Constituency II of Lagos state. The Bill with gazette number SB. 363 was read and passed for the first time during the Senate plenary on November 1, 2016.

The bill was aimed at aligning the voting age of 18 with the eligibility age for contesting for political offices in Nigeria and to guarantee the right to full political participation for young people. The bill seeks to alter Section 65, 106, 131, 177 of the 1999 [the Federal Republic of Nigeria] (as amended) to reduce the age qualification for the Office of the President from 40 years to 35 years; Governor 35 to 30, Senate 35 to 30, House of Representatives 30 to 25 and State House of Assembly 30 to 25.

The bill has been passed by the Senate of the Federal Republic of Nigeria with a 21-9 votes and 2 absentees on the 28th day of July 2017, and same has to be adopted or approved by the state house of assembly and presented back to the national assembly before it is taken to the president for his assent and it finally becomes a law.

However, despite the tremendous progress of this bill both in terms of support and response by the government, it still faces criticisms and challenges, part of which is the passage process by the state assemblies and criticisms by individuals.

Many individuals have expressed diverse views on the Not Too Young To Run campaign. Some of the opinions channeled against the campaign/bill is that Nigerian youths are still adventurous and are not ready to be given a large role of responsibility, as they are still being driven by their youthful exuberance and cannot make decisions that affect the life of a country. Although maturity has never been defined by the age of the person whether old or young and as such this opinion may be a bit one sided.

Some others have however stated that it is only directed at creating room for children of the rich to be covered by political flags and elected into offices, thereby creating a continuous form of oligarchy were power is controlled by the selected few in the society.  The bill according to these opinions is just a crumb of bread thrown in a heap of sand to the members of the public, while handing down the loaves of bread to their children, who are groomed with same mentality, goal and purpose of keeping the country under the siege of the same individuals.

A 2015 research paper into the cost of politics research shows the exorbitant costs that come with wanting to serve the nation. To run for office, the current president paid a whopping N27.5 million (N2.5 million for expression of interest and N20 million for a nomination fee) the opposition candidate would have paid N22 million. In a country where the minimum wage is N18, 000 a month and 70% of the population live below the poverty line, it’s difficult to see how the office of the president is a realistic ambition for the average citizen, talk less of a young person.

Governorship fees are just as outrageous, totalling N5, 500, 500 for the APC and N11, 000,000 for the opposition. The “cheapest” option is a run at the House of Representatives which under the APC costs N2, 200,000 and under the opposition N2, 400,000. Calls to increase the minimum wage have fallen on deaf ears and the youth unemployment rate is at an abysmal high. So how can we honestly suggest that the playing field has shifted even remotely? Although some say that the inclusion of the independent candidacy has curbed this, but a critical look at the cost of running for an election still shows that it almost a herculean task for an average citizen to embark on.

High fees aside, we cannot ignore the grip of corruption and godfatherism on virtually every level of Nigeria’s politics. Godfathers are mostly instrumental to the emergence of virtually every successful candidate from whichever state they control. The godfathers are typically above the law and able to mobilize support, money and violence for candidates. With such a firm grip on power that shows no sign of diminishing, how then does lowering the voting age factor into making politics more fair, or political office any easier to attain?

If youth participation in politics was really important, then as well as reducing the age of qualification, why are the fees not being drastically reduced to represent the wage structure of the country? Why do we not have more avenues for young people to learn what good governance entails through internships and fellowships? The barrier was not just “Not Too Young To Run”, there is also the barrier “Not Knowing Enough to Run”. Reducing the age qualification without tackling any of these other major barriers to office is just another farce from the elite to help uphold the belief that change is afoot, when it’s really just another mirage.

Despite the contrary opinion of some individuals on the said bill, the United Nations has taken clue from this action and has set up agencies to pioneer this campaign to make it a global goal. The Office of the UN Secretary-General’s Envoy on Youth has initiated this global campaign in partnership with UNDP, OHCHR, the IPU, Youth Initiative for Advocacy, Growth & Advancement (YIAGA) and the European Youth Forum in order to convene existing efforts into a global movement and provide young people with a central platform through which to advocate.  The global Not Too Young To Run campaign was launched at the first United Nations Forum on Human Rights, Democracy and the Rule of Law at United Nations Geneva, November, 22, 2016.

This Not Too Young to Run campaign should not end with the passing of the bill but rather further steps should be made to make this bill a reality. This can be done by looking at other spheres that could stunt its enforcement and hinder participation of the average youth in state affairs. It is on this note that we call on the youth to see their tomorrow no more as a futuristic phrase but rather as the everyday they live and start directing their affairs in a manner that would affect the country positively. We call on lawmakers and other actors in governance to ensure that every other element needed to make this bill a reality of rights not a farce is put in place. Let the young be indeed able to run.

1 thought on “Not Too Young to Run: A Farce or a Reality of Rights?”